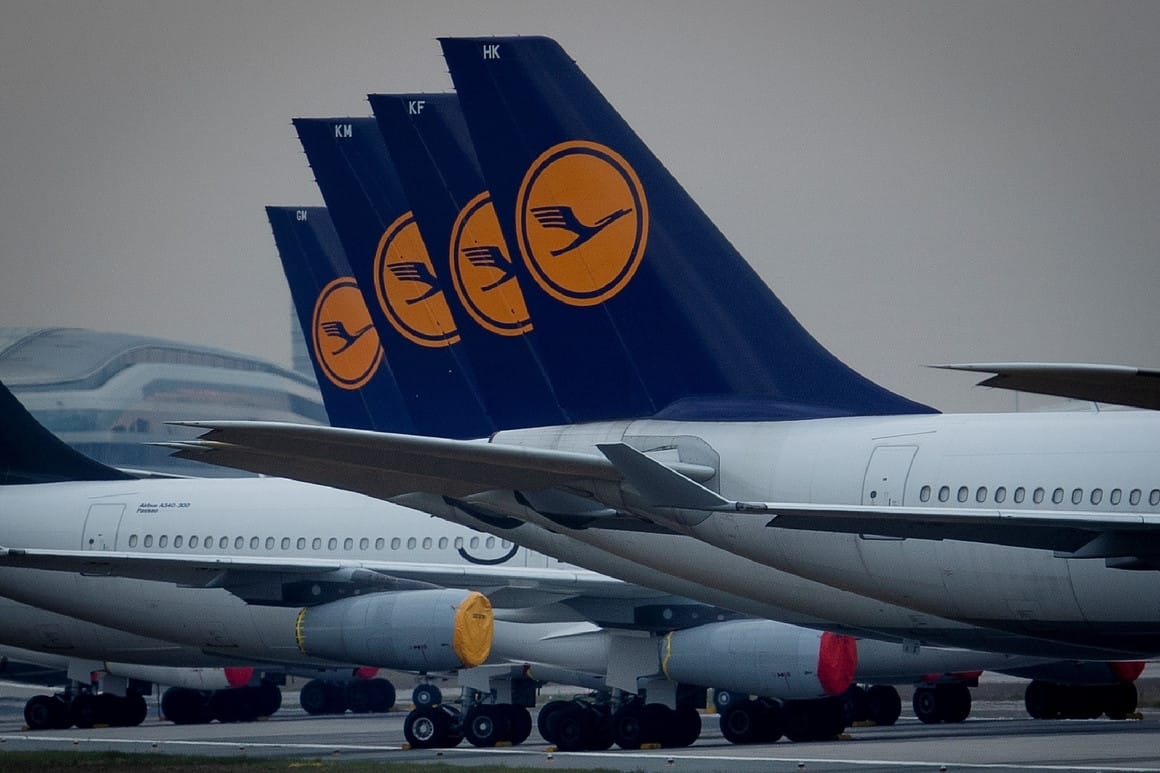 BERLIN — Good evening ladies and gentlemen, this is your captain speaking … the German federal government.

Berlin agreed to a €9 billion deal on Monday to save flag carrier Lufthansa, turning the German government into the single largest shareholder in Europe’s second-largest airline as it looks to restart flights next month following weeks of lockdown.

Underscoring the trouble facing airlines, Lufthansa’s current market capitalization is less than the size of the bailout. But as a strategic asset for an export nation, keeping its flag carrier flying is a no brainer in Berlin with broad political support despite some concerns from the opposition Greens and liberals.

That’s because a weakened Lufthansa would hurt Frankfurt’s position as a global aviation hub that has developed its intercontinental links over decades. It would also hand important destinations in North America and China for exporting high-value German-made goods, and the executives that run the companies that make them, to rival carriers.

The talks over the bailout, which includes a three-year €3 billion loan, were no secret, but the result is the largest airline rescue package and the biggest backstop yet from Germany’s massive Economic Stabilization Fund launched to keep the country’s economy from collapsing under the stress of the pandemic.

It’s also the largest airline rescue in Europe; Air France got a €7 billion loan from the French government while Alitalia has been renationalized for €3 billion.

The cash injection gets Berlin a 20 percent stake in Lufthansa and the option to boost that by an additional 5 percent — enough to allow the government to block any unwanted takeovers. Two supervisory board seats are included, and the deal also includes restrictions on management pay and not paying a dividend to shareholders.

“When the company is afloat again, the state will sell its shares,” Finance Minister Olaf Scholz said Monday, adding he hoped to do so with a small profit.

The deal still needs approval from the European Commission’s competition authorities, and Lufthansa’s own shareholders. Turbulence could come if Lufthansa is asked to give up some of its airport slots and routes by the watchdog in Brussels.

“The aid package for Lufthansa … must not be endangered by Brussels overregulation,” said Ulrich Lange, an MP for the ruling Christian Social Union, the Bavarian sister party to the Christian Democratic Union. “The Frankfurt and Munich hubs must not be weakened in comparison with Paris and Amsterdam. ”

Lufthansa has been badly wounded by the coronavirus. Management said last month it is losing around €1 million an hour, and is carrying only about 1 percent of its normal passenger load.

Lufthansa Group, which also includes brands such as Austrian, Swiss, Brussels Airlines and Eurowings, was forced to ground almost all of its fleet and close its Germanwings subsidiary. The bailout puts wind behind Lufthansa’s plan to get flights going again to popular tourist hotspots such as Mallorca and Venice from next month.

The government has promised to appoint “independent experts” to its two board seats, which rules out politicians. In Germany’s multi-tiered corporate governance structure, which mandates worker representation on supervisory boards, keeping politicians out of the boardroom is important for executives who may need to make tough choices.

“Just because you get bailed out it doesn’t mean you won’t need to fire people,” said an industry official working in the German aviation industry, something that might be more difficult if politicians are on the board.

As with other airline rescues, the emphasis is on keeping the company going, and less on environmental goals like cutting emissions. The deal involves only a cursory reference to Lufthansa agreeing to continue with its “sustainability goals” but stops short of mandating a greener way forward.

“Retiring old aircraft is an easy win,” said Andrew Charlton, managing director of consultancy Aviation Advocacy. “Transferring traffic from short-haul sectors to rail has also been mooted. That will free up slots for long-haul flights, which of course, emit more emissions, but which are generally more profitable.”

The airline bailouts have attracted sharp criticism from the bosses of Europe’s low-cost airlines such as Ryanair, the Continent’s largest carrier, and Budapest-based Wizz Air.

Ryanair boss Michael O’Leary has likened Lufthansa and other flag carriers to drunks at a wedding. “They’re just hoovering up state aid to give them unlimited firepower to distort the competition market once we’re all back flying again,” he told POLITICO.

“All these airlines have been poorly managed and poorly run and now they can turn to their governments to get bailed out and it is certainly distorting the market,” József Váradi, Wizz Air’s CEO, told POLITICO before the Lufthansa deal was agreed.