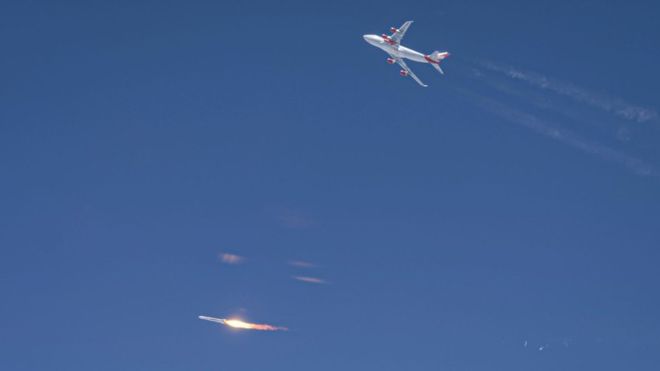 The booster was released from under the wing of one of the UK entrepreneur’s old jumbos which had been specially converted for the task.

The rocket ignited its engine seconds later but an anomaly meant the flight was terminated early.

Virgin Orbit’s goal is to try to capture a share of the emerging market for the launch of small satellites.

It’s not clear at this stage precisely what went wrong but the firm had warned beforehand that the chances of success might be only 50:50.

“Test flights are instrumented to yield data and we now have a treasure trove of that. We accomplished many of the goals we set for ourselves, though not as many as we would have liked,” said Virgin Orbit CEO Dan Hart.

“Nevertheless, we took a big step forward today. Our engineers are already poring through the data. Our next rocket is waiting. We will learn, adjust, and begin preparing for our next test, which is coming up soon.”

The company is sure to be back for another attempt pretty soon – depending on the outcome of the post-mission analysis. The second rocket is undergoing final integration at the company’s Long Beach factory in California and could be ready to fly within weeks.

Most publicity about Sir Richard’s space activities has focussed on the tourist plane he is developing to take fare-paying passengers on joy rides above the atmosphere.

His satellite-launch venture is entirely separate.

Orbit is chasing the growing interest in small spacecraft that are being designed for telecommunications and Earth observation.

New manufacturing techniques, often involving “off-the-shelf” components from the consumer electronics industry, mean these satellites can now be turned out for a fraction of their historic cost. But they need matching, inexpensive means of getting into space – and the air-launched system from Virgin Orbit is intended to meet this demand.

The 747, known as Cosmic Girl, left Mojave Air and Space Port to the north of Los Angeles shortly before midday Pacific time (19:00 GMT / 20:00 BST), carrying the rocket, dubbed LauncherOne, under its left wing.

At 35,000ft (10km), just west of the Channel Islands, the jet unlatched the liquid-fuelled booster to let it go into freefall.

LauncherOne ignited its NewtonThree engine four seconds later to start the climb to orbit. But it seems it didn’t get very far.

“LauncherOne maintained stability after release, and we ignited our first-stage engine, NewtonThree. An anomaly then occurred early in first-stage flight. We’ll learn more as our engineers analyse the mountain of data we collected today,” the company’s Twitter feed reported.

Sir Richard was not in attendance, but he was following events very closely, Orbit executives said.

Although his space start-up is headquartered in California currently, he is keen to bring it to the UK also.

Orbit is working through the possibilities with the US and British governments, the UK Space Agency and the local authorities in the southwest of England. Newquay Airport in Cornwall has been identified as an ideal location from which to base operations.

Britain’s enthusiasm is tied closely to that of its satellite manufacturing sector. The country is one of the biggest producers in the world of compact spacecraft.

Will Whitehorn is president of the trade body UKSpace. He also initiated early design work on an air-launched rocket system when working for Sir Richard in the late 2000s.

“Everyone’s attention right now is on the astronauts launching this week on a SpaceX rocket, but from an industrial perspective [Virgin Orbit] is just as significant,” he told BBC News.

“If the coronavirus has taught us anything it is that our world is changing and space is going to be a big part of that. We could put so much industry outside the atmosphere. Take just the example of server farms. We know we could put them in space to harness solar power. It all comes down to the cost of access to space and that will be revolutionised by this kind of system.”