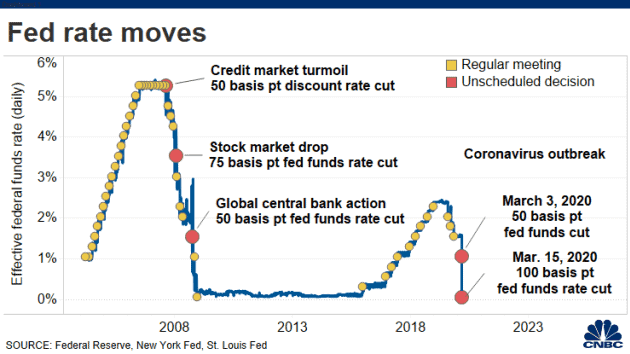 The Federal Reserve said Wednesday it would keep its benchmark interest rate near zero for as long as it takes until the economy starts to recover from the coronavirus crisis.

In addition to holding rates near rock bottom, the central bank also said it will extend its lending and credit initiatives until at least the end of the year.

The Fed’s commitment to low rates means that for everyday Americans, loans are cheaper — if you can get them.

“In general, it’s good to borrow at low interest rates but the reward for saving is lower,” said Yiming Ma, an assistant finance professor at Columbia University Business School.

Although the federal funds rate, which is what banks charge one another for short-term borrowing, is not the rate that consumers pay, the Fed’s moves still affect the borrowing and saving rates they see every day.

For example, the average 30-year fixed rate home mortgage is now at a record low 3.33%, according to Bankrate. (The economy, the Fed and inflation all have some influence over long-term fixed mortgage rates, which generally are pegged to yields on U.S. Treasury notes.)

Refinancing is the single biggest opportunity to save money, according to Greg McBride, chief financial analyst at Bankrate.com. “You can shave $150 to $200 off of your monthly payments — that’s the pay raise you haven’t gotten in a while.”

However, some lenders have stopped offering certain refinancing options and jumbo mortgage programs, due to the new risk in the market from the mortgage bailout program, part of the CARES Act.

“The challenge is that lending standards have gotten much stricter,” said Tendayi Kapfidze, chief economist at LendingTree, an online loan marketplace.

“Banks are tightening standards pretty aggressively because they are concerned that the damage to the economy is going to be long lasting.”

Credit card rates are also down to a four-year low of 16.01% from a high of 17.85% when the Fed started cutting rates one year ago, according to Bankrate. (Most credit cards have a variable rate, which means there’s a direct connection to the Fed’s benchmark rate.)

But with millions of people out of work and a growing number of Americans feeling severely cash-strapped, credit card issuers are closing accounts and lowering credit limits, particularly on those accounts that are at a greater risk of becoming delinquent.

“Many issuers have slowed lending to a trickle because of all the risk caused in the wake of the pandemic,” said Matt Schulz, the chief industry analyst at CompareCards.

“Banks don’t have a good handle on who is a safe borrower and who is a risky borrower. When that happens, they tend to retreat into their shells,” he said — “that’s definitely what we’re seeing today.”

Anyone shopping for a new car will have a similar experience with auto loans. Currently, the average five-year new car loan rate is down to 4.24% although rates are higher for riskier borrowers.

Concerns about defaults prompted Wells Fargo to stop making auto loans to most independent dealers in the country altogether.

“A credit score of 700 or above is where you want to be,” said Bankrate’s McBride. “As you get further below that mark, the availability of credit starts to dry up.”

On the upside, students headed to college in the fall will pay less on their college debt.

Based on an earlier auction of 10-year Treasury notes, the interest rates on federal student loans taken out during the 2020-21 academic year are at an all-time low.

For those already struggling with outstanding debt, the CARES Act offered even more relief by pausing payments on federal student loans until the end of September.

Student borrowers with private loans can benefit as well.

Although federal loans are fixed, private loans may have a variable rate tied to Libor, prime or T-bill rates, which means that when the Fed holds rates down, those borrowers will likely pay less in interest, depending on the benchmark and the terms of the loan.

For savers, historically low rates offer almost nothing in return.

Now, according to the Federal Deposit Insurance Corp., the average savings account rate is a mere 0.06%, or even less, at some of the largest retail banks. (Although the Fed has no direct influence on deposit rates, those tend to be correlated to changes in the target federal funds rate.)

Online-only banks offer slightly higher returns, thanks in part to lower overhead expenses than traditional banks. However, those rates are falling, as well.

A better bet could be high-yield reward checking accounts, according to Ken Tumin, founder of DepositAccounts.com, which are offered at some regional banks and credit unions. Those can pay as much as 3% on deposits, although not all customers will qualify.

Unlike regular checking accounts, which often impose minimum-balance requirements, high-yield accounts have maximum balance limits of $10,000 to $20,000, depending on the bank, and could also require a minimum number of monthly debit card transactions among other conditions.