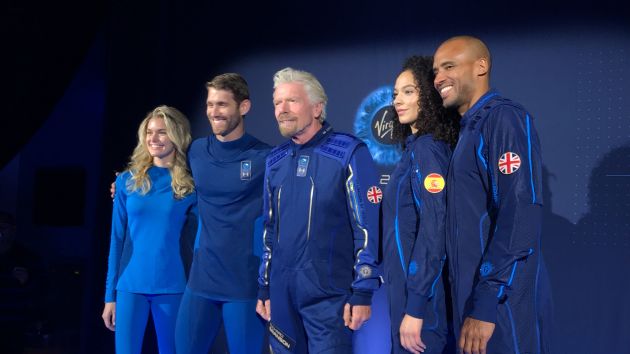 Under Armour on Wednesday unveiled the spacesuits it is making for people to wear on flights to the edge of space with Richard Branson’s Virgin Galactic.

The companies are collaborating on a full line of spacewear for Virgin Galactic, which the companies claim as the first collection “created specifically for private astronauts.” The collection includes the spacesuit, a training suit, footwear and even a limited edition jacket.

Virgin Galactic’s spacecraft will carry as many as six passengers, along with the two pilots, to the edge of space. The spaceship is dropped from a jet-powered aircraft at about 40,000 feet before firing its rocket motor, reaching over three times of the speed of sound as it climbs though the Earth’s atmosphere. Then the spacecraft and its passengers float weightless for about 10 minutes, before gliding back down to land on Earth much like a traditional aircraft.

A ticket for a Virgin Galactic flight goes for about $250,000 per person.

The companies debuted the spacewear collection in a production for media and investors at an indoor skydiving facility near New York City, with dancers and acrobatics wearing the clothes while performing stunts.

The design of the spacewear included input from astronaut trainers, pilots, doctors, stylists and more, Virgin Galactic said. Each spacesuit will be personally tailored to each Virgin Galactic passenger and will include national flags and name badges.

The Under Armour spacesuit is made from a variety of materials that Virgin Galactic says have been tested rigorously in spaceflight-like environments.

For Under Armour, the spacesuit initiative fits into its broader push to sell “performance” gear, like sweat-wicking shirts and shorts. It separates the company from the likes of Nike, Adidas and Lululemon, which have built their brands more around certain sports, such as basketball, soccer or yoga. Under Armour has seen sales suffer more recently in North America, with some analysts saying it’s because the company has stayed so focused on “performance,” missing other trends. But CEO Kevin Plank has argued that Under Armour will stay true to its core.

“One of the main components [of the suit] is one of our in-line technologies we call Rush, which is a celliant yarn that actually goes and helps your muscles recover and it uses infrared heat that actually allows your muscles to build and recover faster,” Plank told CNBC on Wednesday. “It’s also lined with our cold-gear reactor lining that will allow you to stay warm.”

Plank also said Under Armour plans to monetize this initiative by making more space-related gear available to the public for purchase in the future. Virgin Galactic-branded t-shirts went for sale on Under Armour’s website on Wednesday, he said.

Virgin Galactic is in the final stages of testing its spacecraft, with just a couple of flights remaining. The company had a backlog of 603 customers as of the end of June, many of which have waited years for their chance to fly. And, in the time since its two most recent test flights reached the edge of space, Virgin Galactic says it has received interest from more than 3,000 potential customers.

“Because it’s taken so long to get this far I try not to think about the fact that we’re almost there because I have thought about that for a few years,” Branson said told CNBC at the event.

The company plans to begin flying commercial flights in 2020, with Branson expected to fly on the first one.

Virgin Galactic is also preparing to become the first human spaceflight company to go public. Virgin Galactic is planning to list on the New York Stock Exchange before the end of the year, through a merger announced in July with Social Capital Hedosophia, a special-purpose acquisition company created by venture capitalist Chamath Palihapitiya.

While the company has said it plans to list in the fourth quarter of this year, Branson hinted on Wednesday that it may be in the early part of the quarter. Branson said “it’s not long now” until the company goes public.

Once the merger closes, Virgin Galactic will have a valuation of $1.5 billion, with SCH retaining a 49% stake.

Palihapitiya sees Virgin Galactic as “a business that has software-like margins,” telling CNBC in July that he believes there is a “really compelling risk-reward” behind space tourism. UBS, in a March report, estimated that space tourism has a potential market of $3 billion a decade from now, even though it’s “still at a nascent phase.”