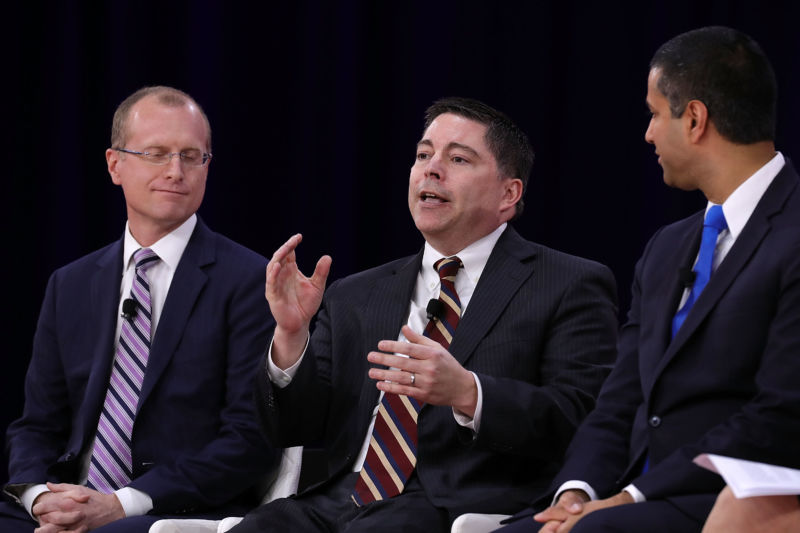 The Federal Communications Commission has voted 3-2 to approve T-Mobile’s acquisition of Sprint, an FCC spokesperson confirmed to Ars today.

T-Mobile and Sprint previously secured merger approval from the Department of Justice, so the deal has been fully cleared by the federal government. But the companies won’t be completing the merger just yet, as they face a lawsuit from a group of state attorneys general who are trying to block the deal.

The FCC hasn’t released its merger approval order publicly. But the final document should reflect what Chairman Pai proposed in May, requiring the merged company to deploy 5G to 97% of the US population within three years and to 99% of Americans within six years. That includes deploying 5G to 85% of rural Americans within three years and 90% within six years.

There is at least one addition to the merger order, though. Commissioner Starks had called for the FCC to halt its merger proceeding while the agency investigates a discovery that Sprint took millions of dollars in government subsidies for “serving” 885,000 low-income Americans who weren’t using Sprint service.

Instead of delaying the merger approval order, Pai added some language that acknowledges the ongoing investigation. Starks said that isn’t enough.

“The rush to judgment here is exemplified by the fact that it was only in response to questions from my office that the draft was amended at the last minute to explicitly preserve liability for these and any other potential violations,” Starks said in a statement today.

Starks and Rosenworcel both criticized the merger approval in their statements today. Starks said:

The expert staff of the Commission and the Justice Department have agreed that the merger between T-Mobile and Sprint, as originally submitted, would likely harm competition and raise prices. Rather than denying that merger, however, the majority has turned to the parties for paper-thin commitments that they contend will expand broadband access and the deployment of 5G.

But these promises cannot mask reality. You don’t need to be an expert to know that going from four wireless carriers to three will hurt competition. This merger takes a bad situation and makes it worse. Higher prices and fewer options across the country will inevitably result. Quite simply, the effects of this ill-conceived merger will hit low-income and rural communities hardest of all.

“We’ve all seen what happens when markets become more concentrated after a merger like this one,” she said. “In the airline industry, it brought us baggage fees and smaller seats. In the pharmaceutical industry, it led to a handful of drug companies raising the prices of lifesaving medications. There’s no reason to think this time will be different.”

Pai argued in May that the merger is “a unique opportunity to speed up the deployment of 5G throughout the United States and bring much faster mobile broadband to rural Americans.”

The Department of Justice’s settlement with the merging companies requires T-Mobile and Sprint to sell some assets to Dish Network, which will attempt to build a 5G network. Specifically, Dish would be able to purchase spectrum licenses, wholesale access to the combined T-Mobile/Sprint network, and Sprint’s prepaid business. That includes subsidiaries Boost Mobile and Virgin Mobile.

Dish’s plan calls for covering 70% of the US population by June 2023, which would leave 100 million Americans without the option of a fourth carrier.

Consumer advocates and economists have warned against the merger. A group of seven economists argued in a filing to the DOJ that the agency’s plan involving Dish will not offset the merger’s anticompetitive effects. The DOJ is accepting short- and medium-term competitive harms and justifying them “based on an exceedingly optimistic view of possible benefits in the longer term,” they wrote.

“[I]f the substantial and acknowledged competitive problems with this four-to-three merger are remedied by this strategy of re-arranging some assets, negotiating some contracts, and then hoping for the best some years down the road, it is unclear what merger would not be salvageable with the same scheme,” the economists wrote.