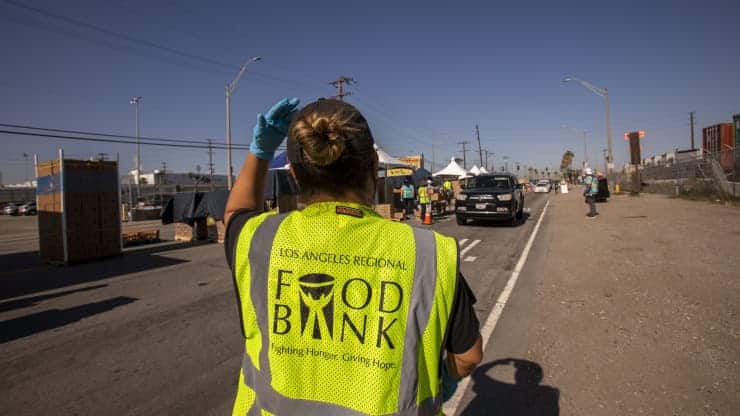 The onset of the Covid-19 pandemic last year prompted millions of Americans to wait in long lines for food assistance in the face of an unprecedented economic shock.

Now, approaching the second Thanksgiving since the pandemic started, food banks say they are still seeing high levels of demand for help from people coping with food insecurity.

That includes food banks in Minnesota, which is seeing a new record spike in cases heading into the holiday.

“Things really aren’t much different than they were a year ago for us,” said Allison O’Toole, CEO of Second Harvest Heartland, one of Feeding America’s food shelves that serves 59 counties in Minnesota and Wisconsin.

The organization, which is more than two decades old, recorded a 30% increase in people accessing assistance for food, O’Toole said.

Those requests for help comes amid other challenges for the Minnesota community, O’Toole said, including an uneven economic recovery and a “racial hunger divide,” where communities of color experience food insecurity at twice the rate of their white neighbors.

“It’s the perfect storm a year later, which is super sobering,” O’Toole said.

Government data points to signs that the economic recovery is underway. The latest weekly jobless claims fell to the lowest level since 1969.

Yet there are also signs that many individuals and families are still struggling. Almost 20 million adults — 9% of all U.S. adults — said that their households either sometimes or often did not have enough to eat in the past seven days, according to government survey data from Sept. 29 to Oct. 11.

Families with children are faring worse, with 12% reporting they were not eating enough because they could not afford to pay for food.

Food prices rose 4.8% in October from a year ago, according to the latest data. That compares to a 5% gain in prices overall, the fastest since 1990, including food and energy.

The monthly child tax credit payments have helped reduce food hardship among families with children, according to the Center on Budget and Policy Priorities.

In 2020, the organization’s food distribution jumped 145%, he said. Yet, as of this month, it is still up more than 100% over pre-pandemic volumes.

A food distribution event over the past weekend drew 1,500 cars.

“We’re still experiencing pretty significant demand for food and doing what we can to get food out there to people,” Flood said.

Much of how well areas have recovered depends on their Covid-19 infection and hospitalization rates.

In Minnesota, the price of ground beef has gone up 25%, making it “undoable at the moment” for Second Harvest Heartland, according to O’Toole. Food prices across the board are up 5% from last year, she said.

Sourcing food, which largely comes from donations, has been more challenging for Second Harvest Heartland’s teams. Recently, they’ve received almost no meat, one of their most requested items.

Other products, particularly “culturally connected” food ingredients, like soy sauce, sriracha or jasmine rice, have become harder to get and more expensive. Other orders have seen long delays.

Supply chain issues have also affected the Los Angeles Regional Food Bank, particularly with regard to driver shortages and transportation.

“We’ve noticed the farther away something is, the longer it’s going to take to get,” Flood said.

The Los Angeles Regional Food Bank is planning for the start of 2022 to be much like what they’re experiencing now.

“It’s hard to look to the second quarter, because there’s too many variables,” Flood said.

For food banks that rely that heavily on donations, much of their outlook will depend on how much money they raise in the remaining weeks of the year.

Even if people cannot make a financial gift, they can help by volunteering or raising awareness that it’s OK to ask for help, O’Toole said.

“Food insecurity is solvable,” O’Toole said. “That is the great part about this problem.

“We know how to do this,” he added. “We need the resources and the community engagement to do it.”