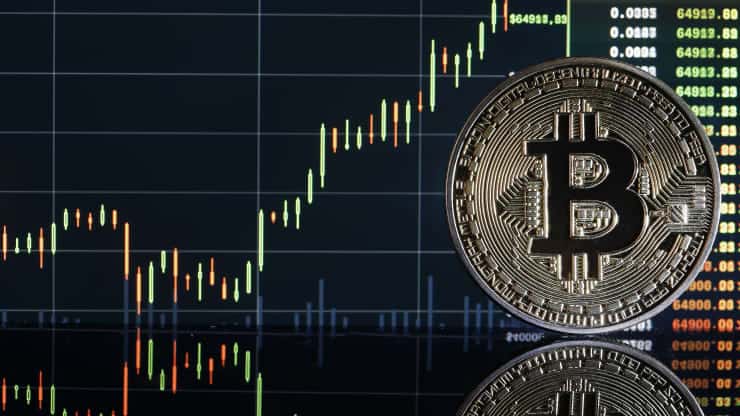 This week marked a milestone for cryptocurrency as investors started trading the first U.S. bitcoin futures exchange-traded fund, exceeding other ETF launches, and another followed Friday.

These funds invest in bitcoin futures contracts, or agreements to buy or sell the asset later for an agreed-upon price, rather than bitcoin directly.

While the new offerings fall short of what the industry eventually wants — ETFs investing in the currency itself — it didn’t slow excitement for the first launch.

The ProShares Bitcoin Strategy ETF (ticker: BITO) saw one of the biggest first days on record for ETFs, raking in $550 million from crypto-hungry investors. Overall, more than $1.01 billion of shares changed hands, according to Morningstar.

“The original intent [of bitcoin], and certainly still the intent of many, was to try to upend traditional finance,” said Ben Johnson, director of global ETF research for Morningstar.

“Instead, traditional finance has caught bitcoin in its tractor beam, reeled it in and turned it into something that Wall Street is going to make millions if not billions on by creating this whole new ecosystem,” he said.

Companies have been vying to release the first U.S. bitcoin ETF for nearly a decade. But the Securities and Exchange Commission has been slow to embrace the asset, citing concerns about the lack of regulation and the potential for fraud and manipulation in the bitcoin market.

“General conservatism has been a pattern among U.S. regulators,” said Johnson, pointing to the landscape littered with bitcoin ETF filings being updated, abandoned applications and others collecting dust.

Previously, most bitcoin ETF applications have been based on so-called spot markets, or investing in the currency directly, explained Stephen McKeon, associate professor of finance at the University of Oregon in Eugene and partner at Collab+Currency, a cryptocurrency-focused investment fund.

However, there was a shift in August when SEC chairman Gary Gensler signaled the agency may be more open to a futures-backed bitcoin ETF under the Investment Company Act of 1940, which governs mutual funds and may offer “significant investor protection.”

The change prompted a flood of filings ahead of this week’s approvals.

With the Commodity Futures Trading Commission overseeing U.S. bitcoin futures and the ETF wrapper falling within the SEC’s jurisdiction, regulators may offer some investor protection, Gensler said on CNBC’s “Squawk on the Street” this week. But it’s still a “highly speculative asset class,” he warned.

While the SEC is expected to approve a handful of other bitcoin futures ETFs, it’s unclear if and when the agency may greenlight an ETF investing in the currency itself.

“I don’t think the SEC is in any big hurry to move forward and allow direct investment in bitcoin by ETFs anytime soon,” Johnson said.

What to know before investing

While there’s immense interest in bitcoin futures ETFs, many experts suggest taking the time to learn more about the assets before investing.

“This is like Christmas in October for high-frequency traders,” said Johnson, explaining how massive price swings may appeal to certain investors.

Although the funds may have a high correlation with bitcoin, the asset won’t mirror the currency’s value because it tracks the price of futures contracts, which can be unpredictable.

“I think you have to be incredibly careful, and you have to prepare for immense volatility,” said Michael Bisaro, president of StraightLine Group in Troy, Michigan, which ranked 92nd on CNBC’s FA 100 list for 2021.

There may be a place for it, but it can be “massively dangerous” if it becomes a large portion of someone’s portfolio, he added.

However, a small amount of dabbling may not be a problem once retirement and other financial goals are on track, some advisors say.

“I have no problem with clients investing in it out of their budget or lifestyle,” said certified financial planner Jordan Benold, partner at Benold Financial Planning in Prosper, Texas, explaining how some have “fun money” on the side.

But as more crypto-based products come to market, investors may soon face a dizzying array of portfolio choices.

“Bitcoin is just the tip of the iceberg,” said McKeon. “We’re going to see ETFs with exposure to many different crypto assets in the coming years.”