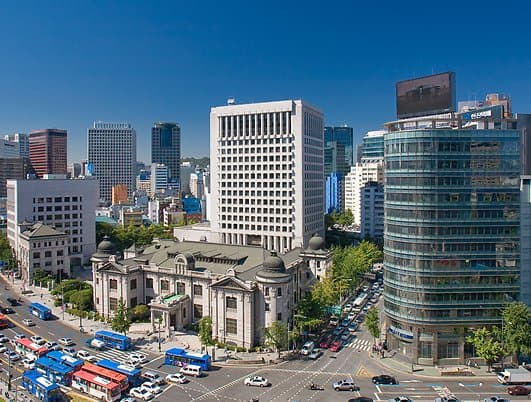 SINGAPORE — Shares in Asia-Pacific were mixed on Thursday as investors reacted to the Bank of Korea’s rate decision.

South Korea’s Kospi dipped 0.47% to close at 2,980.27 after the Bank of Korea raised its policy rate by 25 basis points to 1%, a move that was largely expected by analysts in a Reuters poll.

Following the decision, the Korean won traded 1,189.89 per dollar, weaker than levels around 1,185 seen against the greenback yesterday.

The South Korean central bank’s decision followed a similar move by the Reserve Bank of New Zealand on Wednesday.

Natixis’ Trinh Nguyen told CNBC’s “Squawk Box Asia” on Thursday that the Bank of Korea is “ahead of the curve doing this because it can afford to do so,” given the economy’s upturn.

“We see that given the expectations of higher rates by the U.S. and the hawkish minutes you saw by the Fed, this is a right move not just for South Korea but also to synchronize with the Fed cycle,” said Nguyen, a senior economist at the firm.

Minutes released Wednesday from the U.S. Federal Reserve’s November meeting showed its members expressing concern over inflation and being willing to tighten policy should it continue running hot.

In Hong Kong, the Hang Seng index closed 0.22% higher at 24,740.16. Shares of developer Kaisa Group soared 13.86% as they returned from a trading halt. Kaisa on Thursday announced an offer to bondholders to exchange their existing bonds with new bonds that have an extended maturity.

The U.S. dollar index, which tracks the greenback against a basket of its peers, was at 96.699 following its climb from levels below 96.5 earlier in the week.

The Japanese yen traded at 115.33 per dollar, weaker than levels below 114.5 seen against the greenback earlier this week. The Australian dollar was at $0.72, still off levels above $0.724 seen earlier in the trading week.

Oil prices were lower in the afternoon of Asia trading hours, with international benchmark Brent crude futures falling 0.1% to $82.17 per barrel. U.S. crude futures declined 0.24% to $78.20 per barrel.