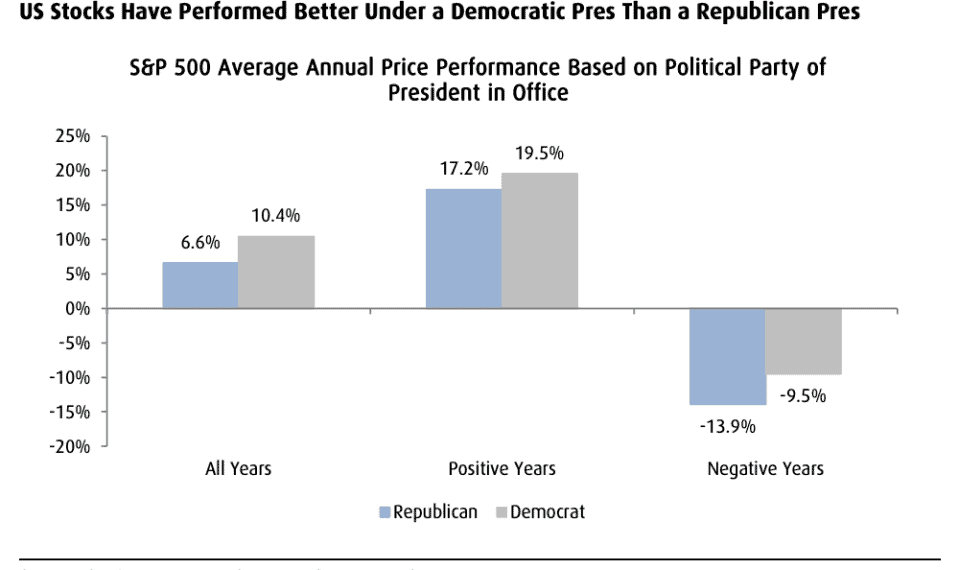 The gains have tended to stretch throughout the presidency of Democrats, Belski’s data shows. On average, the S&P 500 has gained 10.4% annually when a Democrat has been in office compared to a 6.6% return under Republican leadership. The S&P 500 has performed better in down years, too, when Democrats are in the Oval Office — the average annual decline has been 9.5% versus a 13.9% drop for a Republican leader.

Belski says he conducted the research to dismiss the long-held notion stocks do terribly during a Democratic presidency amid fear of higher taxes and regulations.

“Over the past several weeks since Mr. Biden became the US President-elect, one of the most popular topics during our client conversations has centered on the perception that Democrats tend to hinder stock market returns as a result of their less business-friendly policies and tendencies to pursue increased regulation and taxes,” Belski says. “We do not share these same fears as our work shows that US equity returns and US economic growth have actually been notably higher under Democratic presidencies compared to Republican presidencies whether it is by coincidence or causation.”

In the lead-up to the Biden presidency, stocks are already trading as if history is poised to repeat itself. Amid the specter of a new $1.9 trillion stimulus plan to boost the economy during the COVID-19 pandemic, the Dow Jones Industrial Average is up 2% in the past month. The Nasdaq Composite has shown a 3.5% gain, while the S&P 500 has clocked in with a 2.5% advance.

Since Election Day on Nov. 3, all three of the major equity Indexes are up by more than 15%. The Nasdaq has led the way with a 20% surge.