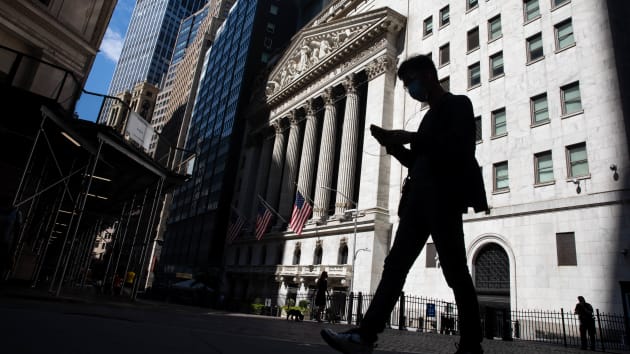 The market could lose some of its exuberance in the week ahead as the calendar turns to August, and investors await Friday’s July employment report and keep their eyes on Washington.

The focus will also be squarely on politicians, as Congress struggles to find a middle ground on a new fiscal spending package and decide the fate of the $600 a week unemployment supplement that was set to expire July 31. Former vice president Joe Biden is also expected to name his running mate in the coming week.

The jobs data will be crucial, particularly since the number of people filing for unemployment benefits has been edging higher, instead of falling back, as expected. According to Refinitiv, about 1.36 million new jobs are expected, well below the 4.8 million added in June, and the unemployment rate is expected to fall to 10.7% from 11.1%.

Trading around the report could be volatile, since some economists expect more than 2 million jobs were added, and some even see flat or negative payrolls.

“August has traditionally been a challenging month for investors,” said Sam Stovall, chief investment strategist at CFRA. The market is entering what historically has been the worst two months for stocks.

In presidential election years, however the odds for August gains are better, as it rose 63% of the time and 73%, when the incumbent is up for re-election.

There are also about 120 S&P 500 companies reporting earnings, but the big earnings show for markets was this past week when four of the five biggest tech giants all reported Thursday afternoon. Three of those stocks — Apple, Amazon and Facebook — surged, helping Nasdaq outperform Friday with a more than 1.5% gain.

“We’re only a month into the reporting period, and things are going to become less and less important from an earnings perspective,” said Stovall. “I think investors are sort of disappointed in that the bar was set so low for second quarter earnings that expectations were that we were going to see a lot of companies beat, which we have. But we were also going to see a gradual uplift of earnings expectations for forward quarters. We’re not seeing that.”

Eighty-two percent of the companies reporting so far have beaten estimates, well above the average 65%, according to Refinitiv. The earnings decline is now looking closer to 33% from an initial 40%, and tech, which has been leading the market is one of the best performers. Profits for the sector now look to be up 1.4%, according to I/B/E/S data from Refinitiv.

Because the tech names have contributed so much to market gains, their earnings were an important test for the market, and they didn’t disappoint. But they didn’t manage to pull up the whole market very far on Friday.

Among the names reporting in the coming week are a diverse group, including Disney, ViacomCBS, Bristol-Myers Squibb, Berkshire Hathaway, AIG, Clorox, and Wayfair, to name a few.

“The earnings story is over. My call had been once we had gotten through the earnings season, we would be more vulnerable to a sustainable pullback,” said Barry Knapp, Ironside Macroeconomics managing partner and director of research.  “Obviously, it’s volatility season, but it’s also an election year. … We’re more vulnerable to that next week and earnings won’t hold us up.”

Knapp said if President Donald Trump and Republicans do not begin to perform better in the polls by Labor Day, the market is likely to focus on what a Democratic win would mean for taxes and regulation. That could be a negative for stocks.

“If he hasn’t made headway by then, it’s likely he’s done.That’s about the point when things become pretty set in stone. The market will presume that’s the case,” Knapp said.

The politics of the stimulus package could also reverberate through markets, until it looks like the Senate Republicans and House Democrats can find common ground.

The two sides look to be at a standoff, but an agreement is still expected in early August. The market is particularly watching to see what happens with the enhanced unemployment benefits. Republicans have proposed cutting it to $200, but Democrats support keeping it.

Cutting the size of the payments back might be good for the labor market and persuade more workers to return to work, some strategists say. However, there is also concern that the funding has helped stimulate the economy and keep the unemployed from defaulting on loans and payments. Consumer spending on goods in June was even higher than last year, and that was also seen as getting a lift from stimulus.

Besides the jobs report, there are other important data like ISM manufacturing on Monday. There are also monthly vehicle sales Monday, and ISM nonmanufacturing data Wednesday.

NatWest Markets economist Kevin Cummins is one of the economists who expects the jobs gains to be much smaller than the past two months. He expects the payrolls to come in at just 200,000. “You look at jobless claims, and you see a stalling out,” he said. “The Fed is right. There is significant downside risk to the economy.”

A trade to watch

Treasury yields, in the 2-year to 7-year range, fell to new lows in the past week. The 10-year yield, not yet at a record low, was also falling and was at 0.53% Friday. At the same time, the dollar was down more than 1% on the week and 4% for the month.

Gold was a beneficiary of the lower interest rates, weaker dollar trade, rising about 5% for the week and 10% for the month.

Strategist say investors are reacting to super-low interest rates, concerns about the economy, and the possibility that huge government spending will send inflation higher.

During this time period, the Treasury Inflation-Protected Securities funds recorded their two best weekly net inflows ever with increases of $1.9 billion and $1.5 billion, respectively, for the fund-flows weeks of June 24 and July 1.

Lipper said investors started to put money into TIPS funds in the middle of the second quarter, and the flows have been . net positive in 11 out of 13 weeks since the beginning of May. This its second-worst quarterly net outflows ever as oil prices slumped in the first quarter.

“I think this is going to be a much more inflationary decade. It will start out slowly. [Fed Chairman Jerome] Powell is right that more forces are putting downward pressure on inflation at present. But the market looks past that,” said Knapp. “The big story in 2021 will be the recovery of inflation. You’re already seeing it in import prices.”