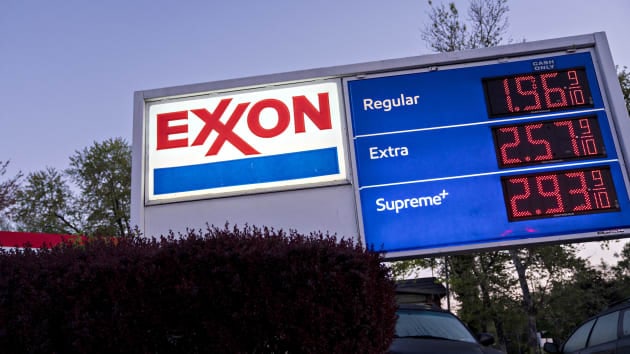 Exxon said on Friday that it lost $1.1 billion during the second quarter amid “global oversupply and COVID-related demand impacts.” It was the oil giant’s second straight quarter of losses.

The company lost 70 cents per share on an adjusted basis, while revenue came in at $32.61 billion. In the same quarter a year ago, Exxon earned 73 cents per share, on revenue of $69.09 billion.

Analysts expected the company to report a loss of 61 cents per share for the second quarter, and revenue of $38.157 billion, according to estimates from Refinitiv.

After trading in the red for much of the day, shares of Exxon rallied into the close and finished the session 0.5% higher.

“We have increased debt to a level we feel is appropriate to provide liquidity, given market uncertainties. Based on current projections, we do not plan to take on any additional debt,” he added.

Oil-equivalent production fell 7% year-over-year, and the company said average prices for crude oil and natural gas were “significantly lower” than in the same quarter a year earlier.

West Texas Intermediate, the U.S. oil benchmark, is down more than 30% this year, which has forced energy companies to slash spending and in some cases, cut their dividend.

But ahead of its quarterly results, Exxon once again reiterated that it has no plans to cut its dividend. The third quarter dividend will be 87 cents, according to a company statement released Wednesday.

In the first quarter the oil giant lost $610 million due to $2.9 billion in write-downs tied to falling oil prices. Exxon posted a GAAP loss of 14 cents per share, and a non-GAAP profit of 53 cents per share. Revenue fell to $56.16 billion.

Shares of Exxon are down 40% this year.