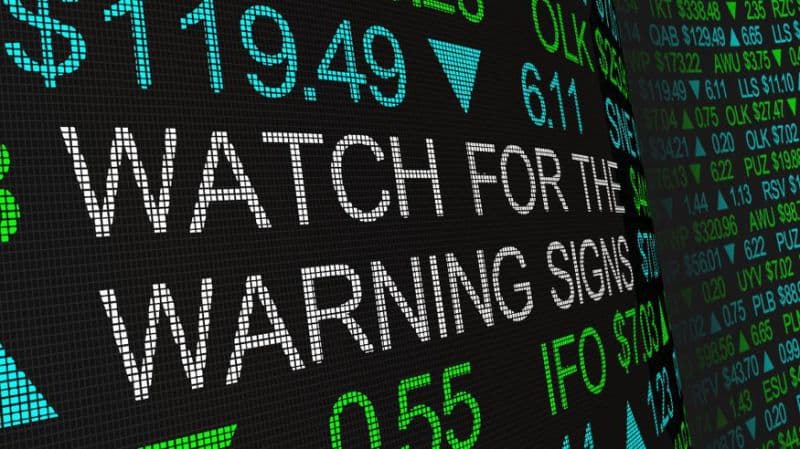 A lot of investors have been wondering whether another stock market crash will happen. There’s an easy answer to that.

Whether that’s a week, month, or years from now is the real question. However, many analysts are predicting that another market dip at least is expected in the near future. While we can’t predict to the moment when that could happen, there are some indicators that could tell us another stock market crash is coming.

By looking at what’s already happened, we can perhaps figure out what to look out for. After all, history repeats itself.

Stock market crash: the why

Of course, there’s the obvious: COVID-19. Almost as soon as COVID-19 became known globally, it seemed to hit almost every shoreline. As the virus spread, the markets fell. By mid-March, the S&P/TSX Composite was just one of the composite to have fallen nearly 40%. But the stock market crash goes far beyond that.

While no one could’ve predicted the virus, many analysts believed a stock market crash was coming. Another factor was the oil and gas sector. The price of oil had been dropping for years, but then it came to a crashing halt, with Russia and Saudi Arabia creating an oil price war with the Organization of Petroleum Exporting Countries (OPEC).

Yet on top of all this was a poor economic situation that’s been getting worse since the last financial crisis. Unemployment was up, the U.S. Federal Reserve announced an inverted yield curve, and there has been a large increase in corporate indebtedness.

Gross world product rose from 84% a decade ago to 92%, about $72 trillion. As the economic climate worsens, companies can’t repay debts or refinance them, causing the restructuring we’ve seen.

There seems to now be some rose-coloured glasses in the markets today. The stock market crash is practically in the rear view to many, with a rebound underway for the last few months. But many analysts are warning that investors are falling into the “bear market trap.” Many believe the economic situation has changed when really, it hasn’t.

Part of the rebound has been from news that jobs have been added and a vaccine could soon be underway. But there isn’t a vaccine available yet, and hundreds of thousands of jobs don’t replace the millions of people in Canada with less or no work. This is why analysts believe the markets will continue to crash well into July.

The end of June means more earnings reports will come out — and more restructuring is likely. Overall, not much else has changed. Oil and gas prices are still weak. The coronavirus is still very much part of our everyday life. Countries are still struggling as debt climbs and businesses weaken.

Companies large and small are going to have to make further cuts if there is any hope of survival. This is likely to trigger poor earnings reports, and poor share price performance. So yes, I would say before the summer is out we are going to see another stock market crash.

There are a few things you can do to prepare before the next crash. First, sell stocks if you need money in the next year or so. Make sure you can pay your bills before anything else. Next, make sure your shares are in solid companies that will come out of a crisis well, even if that means a slump for now. And finally, have some cash on hand to invest in some more good companies should the market drop again.

The one stock I would look out for is Royal Bank of Canada (TSX:RY)(NYSE:RY). Royal Bank is the largest bank of the Big Six by market capitalization, and has witnessed solid performance thanks to expansion and highly lucrative investments.

If any stock will come out strong, it will be Royal Bank. Meanwhile, you get a solid 4.68% dividend yield, which actually increased last earnings report.

While we can’t totally predict the next stock market crash, we can always prepare. For now, hold steady and know no matter what the markets will rebound eventually.