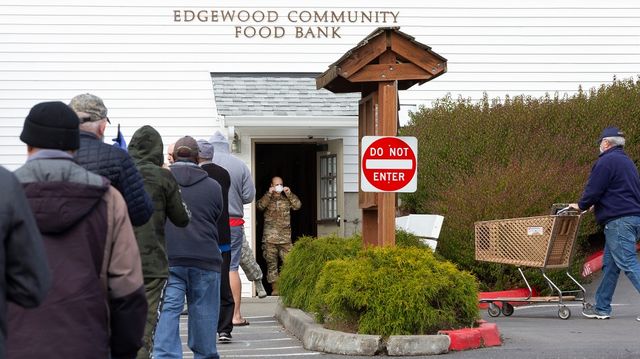 It took 33 days for stocks to drop 34%, and three weeks to gain half of it back. Whiplashed investors have been thankful for a dose of calm, but signs are emerging the lull may not last.

The clues are evident across options markets, in surging share volume and in widening daily price swings, among other places. Frantic positioning and extreme readings in market internals show that while the S&P 500 has been nestled in a trading range for four weeks, investors remain anything but settled.

“Volatility is picking up,” said Matt Forester, chief investment officer of BNY Mellon’s Lockwood Advisors. “More volatility than what we’ve seen over the past couple months is probably in order for the market. There is a real tug of war from what we expect from policy makers and some of the dire fundamentals.”

The S&P 500 sank 1.1% Tuesday, turning sharply lower after a report questioned promising results in a virus vaccine study. The increased prospect for a way to battle the pandemic had sparked a 3.2% rally Monday.

Below are seven charts that illustrate the flash points in the market.

Tiny investors are historically bullish. Last week, the smallest of options traders (those who trade 10 contracts or fewer at a time) positioned themselves to bet on a rally, buying bullish calls and selling bearish puts at a record pace, according to Sundial Capital Research.

“When we look at a group of traders who tend to be wrong at emotional extremes, the warning sign is clear,” said Jason Goepfert, the president of Sundial. “There is no data we follow that is more worrying than this.”

A broader view of options trading shows all types of investors reconsidering protection. The Cboe put-to-call ratio for stocks, which tracks volume in bearish versus bullish bets, fell Monday to the lowest level since Feb. 19 — the day the S&P 500 last hit a record before falling into the fastest bear market of all-time.

At the height of Monday’s stock rally, after positive early results for an experimental vaccine, a moment-by-moment measure of investor buying interest registered its highest reading ever. The number of stocks rising on the New York Stock Exchange exceeded those falling by 2,049 at one point, sending the NYSE Tick Index to a record high.

Over the last few months, a key fixture of the coronavirus stock crash has been the importance of company size. With concerns of a credit crunch and solvency risk running high, investors turned to large firms with strong balance sheets for safety.

This year, an equal-weight version of the S&P 500 has fallen twice as much as the regular market-cap weighted benchmark. The small-cap Russell 2000 Index is still down 20%. Those trends reversed sharply on Monday, with the Russell 2000 up 6% and the equal-weight S&P 500 beating the regular gauge by the most since 2009.

Valuations make a lousy market timing tool. Nevertheless, by most measures stocks look expensive. The S&P 500’s forward 12 month price-to-earnings ratio is now above 21, the highest since 2001. Analysts now expect S&P 500 profits to plunge 21% this year, but rebound 26% in 2021 to $160.90 a share, according to data compiled by Bloomberg Intelligence.

In the month of March, an average 15.6 billion shares traded across U.S. exchanges a day, the most active month in at least 11 years. Since, volume had been subsiding — the past two weeks were the least active since late February when the selloff began. But Monday saw a pickup, with 12.8 billion shares changing hands, the most since April 30.

The size of daily price swings has also been creeping higher. While still a long way from the days of March, when stocks moved 5% a day in the most volatile month on record, the S&P 500 swung an average of 1.7% over the last five sessions, the most in nearly a month.

Investors are throwing in the towel on value stocks, or those that trade cheaply. The latest Bank of America Fund Manager Survey shows a net 23% of respondents think value will lag growth going forward. That’s the most bearish stance on value stocks since late 2007.

The timing is notable considering the persistent underperformance of the value style. Last week, the Russell 1000 Value Index had its third-worst week versus growth in the last decade, pushing a relative ratio of value versus growth to a fresh record low.