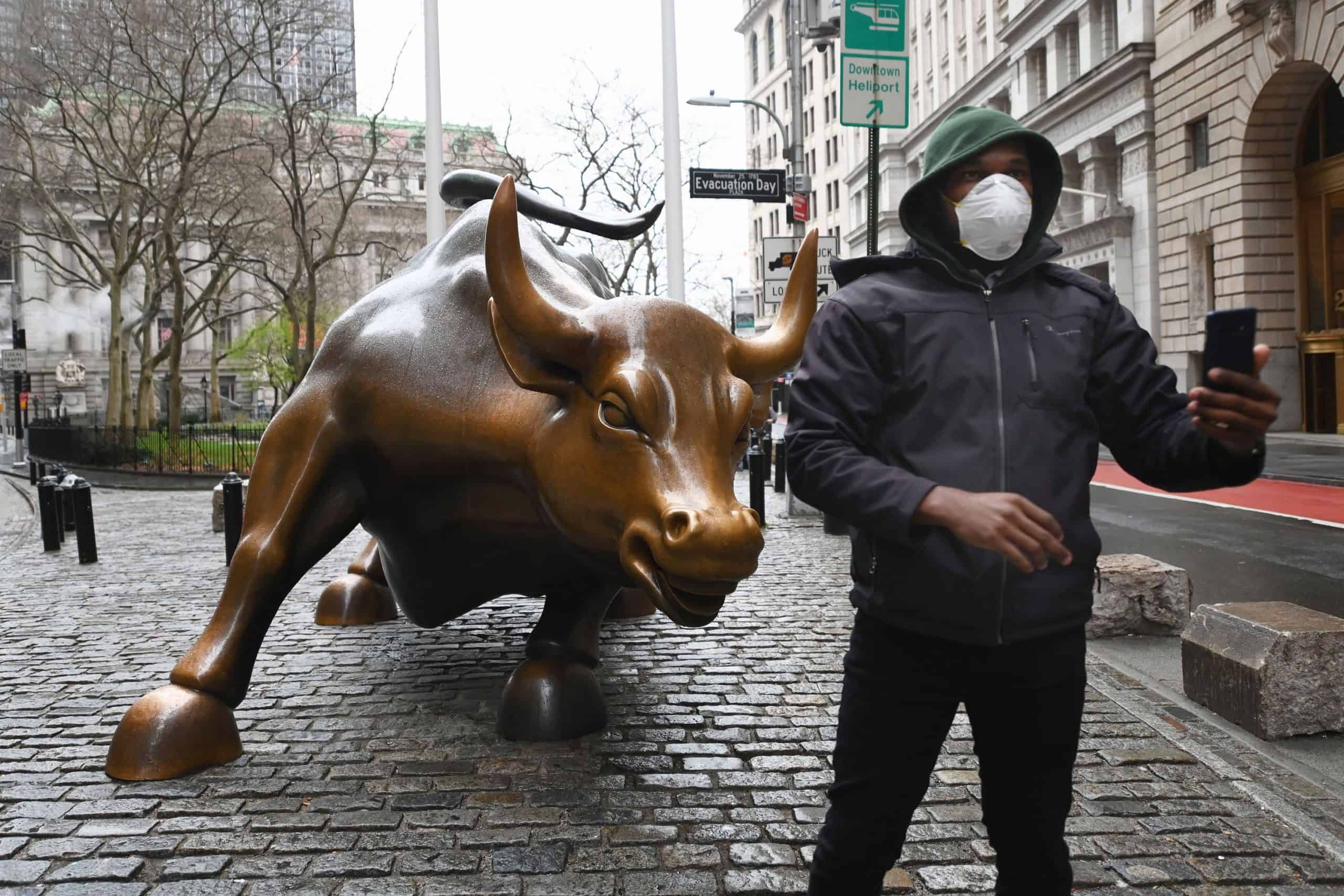 Stocks appear to be finding the bottom but some strategists say it may be over a trap door that could give way to another big decline.

Some credit markets are faring better, the dollar is weakening, and there are positive technical signs pointing to a bottoming in the equities market. But it appears to be driven by hopes for a fiscal stimulus package and the massive Fed programs that have flooded markets with an unprecedented amount of liquidity in a very short time.

The real pivot by markets may come when there are signs the number of new cases of coronavirus have peaked in the U.S., and there is a new level of visibility on the economic impact and earnings hit from the virus. There are currently about 50,000 U.S. cases, ten times higher than week ago.

“The truth is the market is going to bottom when the number of cases starts to peak,” said Jonathan Golub, chief U.S. market strategist at Credit Suisse. “Between now and then, you’re left with volatility.”

The Dow Jones Industrial Average on Tuesday bounced more than 11% in its best day since 1933 as Congress moved closer to adopting a giant stimulus package to fight the economic impact of the virus. The S&P 500, which hit an intraday low of 2,193 on Monday,  rallied 9.4% to 2,447, in its best day since October 2008.

“This 2,300 to 2,400 level has been an area that is finding some buyers. That’s the December 2018 low. Obviously, we broke it for a couple days, but this is where the market is trying to find some traction,” said Peter Boockvar, chief investment officer at Bleakley Advisory Group. “I think the market has priced in the very short-term bad news. We know the patient counts are going to spike over the next two or three weeks.”

Boockvar said the virus impact will remain what drives the stock market, and it will respond when the cases appear to wane.

However, there are some important technical signs that the market could be on the mend.

Fundstrat technical strategist Robert Sluymer said he sees the start of a bottoming process, in part because market internals have been signaling it. The number of 52-week lows on the New York Stock Exchange peaked on March 13, as did the put-call ratio. The CBOE Volatility Index peaked March 18 at a record high, and short-term momentum indicators are showing signs of decelerating and turned positive last week into this week.

“The extreme selling pressure and market structure stress that developed in March is likely subsiding and an internal low has likely developed,” Sluymer wrote. ’While it’s premature to conclude the final lows are in for the market, a bottoming process has likely begun, and we expect to see more positive divergences developing into late April and mid Q2 consistent with a bottom in our intermediate-term indicators.”

JPMorgan strategists say the market has been very oversold, and now a very large short position could result in a surge of buying if one of two things happens. One would be a bigger-than-expected stimulus package and the other would be a less negative impact from the virus than expected.

But Golub and other strategists say it’s premature to expect a sustainable bounce back now.

Economists have been downgrading their expectations for the economy, which has come to an abrupt halt more in some parts of the country more than others, depending on which states have issued stay-at-home orders.

The U.S. economy is already believed to be in a recession, and it could slow more than it ever has in one quarter. Goldman Sachs economists expect a 24% contraction in the nations second quarter gross domestic product. Accompanying the sharp, albeit temporary downturn, is expected to be a very large jump in the unemployment rate.

Starting this week, Thursday’s weekly unemployment claims could show a big impact from workers filing for claims with their states.

“The most important day I think is the day we’re going to have no increases in the number of new illnesses. The second most important day is going to be this Thursday,” said Golub.  “The expectations are between 2 and 2.25 million people [will file claims], so this week is expected to be three times worse than the worst week in the financial crisis.”

John Briggs who heads strategy at NatWest Markets said he too is focused on the Thursday report. “I think it’s dangerous to call a bottom. When unemployment prints at 3 something million on Thursday, I don’t know how the market is going to handle it,”  he said. Last week, there were 281,000 claims reported by states, a jump of 70,000.

Briggs said the Fed has made some progress getting credit markets rolling again. The Fed, in little over a week, took interest rates back to zero, announced big additions to its repurchase, or repo, operations; said it would buy unlimited Treasurys and mortgages, and created programs to buy commercial paper, municipal bonds and corporate debt.

“Front end credit was where the stress is. There’s definitely been some easing in anticipation of having a buyer of last resort,” Briggs said. “Corporate paper might take a little longer. Things are stabilizing. It’s definitely helping.”

There are other rough spots for the market besides the economic data, and that could include the upcoming corporate earnings period, when companies will discuss their outlooks.

The big impact on Italy of the coronavirus is being watched closely on Wall Street, particularly as it declared a  shut down and practiced social distancing to stop the spread of the virus.

Traders said it was positive that the number of new cases seemed to stabilize there for two days, as did the death toll. But the death toll rose again to 743, after reaching a low of 601 Monday.

“I think if you use the pattern of behavior that we’ve seen in let’s say Asia or hopefully Italy that we’re probably three weeks, maybe two weeks,” from a U.S. peak, said Golub. He noted that may be optimistic. “It doesn’t mean between now and then, the number of cases won’t be extremely high because we’re testing people. If we see the peak out in two or three weeks, I think the market sees what the thawing process looks like and we start to look forward.”