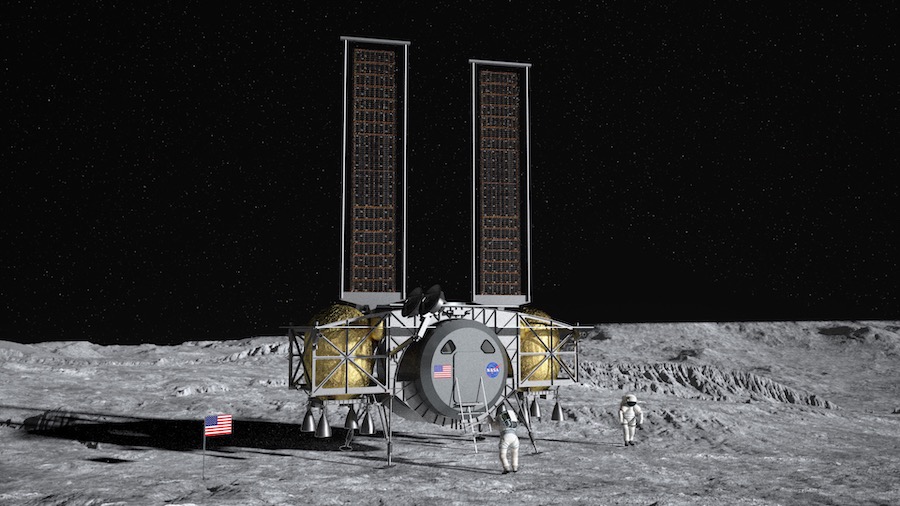 If you would like to see more articles like this please support our coverage of the space program by becoming a Spaceflight Now Member. If everyone who enjoys our website helps fund it, we can expand and improve our coverage further.

Dynetics, an Alabama-based company with broad experience as a supplier of aerospace components and systems, is seeking a major role in NASA’s Artemis moon program with a proposal for a human-rated lunar lander developed in partnership with Sierra Nevada Corp. and other companies.

Sierra Nevada officials disclosed the proposal from the Dynetics-led lunar lander team last week, and a Dynetics spokesperson confirmed Monday the company submitted a bid last year to NASA for funding to develop a crewed spacecraft to ferry astronauts to and from the moon’s surface.

“We did submit a proposal,” said Kristina Hendrix, a spokesperson for Huntsville, Alabama-based Dynetics. “We have put together a very impressive team of experienced small and mid-sized companies that bring a wide range of experience in NASA, DoD (Department of Defense) and commercial space programs.”

A Sierra Nevada official said last week that the company is supporting Dynetics on a crewed lunar lander concept.

John Roth, vice president of business development for SNC’s space systems division, said the company was not publicizing its participation in the Human Landing System competition before submitting the proposal. Bids for the HLS competition were due to NASA on Nov. 5.

Hendrix confirmed SNC is one of the companies supporting the Dynetics HLS proposal. She said Dynetics will not discuss details of the HLS concept during an active procurement.

In May 2019, NASA spread more than $45 million in funding to 11 companies through the space agency’s Next Space Technologies for Exploration Partnerships, or NextSTEP, program for studies and prototyping of lunar lander elements. NASA awarded funding to Dynetics for one descent element study and five descent element prototypes, and SNC received funding for studies of descent, transfer and refueling elements, and descent and transfer vehicle prototypes.

Sierra Nevada’s largest space project is the Dream Chaser, a space plane originally conceived to carry crews into orbit, and now in development to resupply the International Space Station under contract to NASA.

The company is also working on its own robotic commercial lunar lander, and has developed a prototype for an inflatable in-space habitat. NASA added SNC to a roster of companies in November competing for contracts to deliver science payloads and cargo to the moon’s surface.

NASA is evaluating proposals for the Artemis program’s Human Landing System from several teams, including the Dynetics/Sierra Nevada concept, a lander to be developed by Blue Origin in partnership with Lockheed Martin, Northrop Grumman and Draper, and a Boeing-led proposal with participation from Aerojet Rocketdyne and other aerospace contractors.

Industry sources say SpaceX also expressed interest in proposing a lander to NASA under the agency’s Human Landing System procurement. SpaceX is working on a next-generation vehicle named Starship it says can land cargo and crews on the moon and other planetary surfaces, but the company has not disclosed any details about what concept it may have proposed to NASA, or whether it submitted a proposal at all.

NASA is expected to select multiple companies for 10-month Human Landing System concept studies, then pick two proposals to continue funding through development and launch. NASA hopes one of the commercial landers will be ready to deliver a two-person crew to the moon’s south pole region in 2024, a fast-track schedule for the Artemis program set by the Trump administration last year.

The second team’s lander could launch on a follow-up crewed mission to the moon’s surface in 2025, NASA says.

NASA says the lunar landers, to be built and owned by private industry, could launch on commercial rockets to rendezvous with the agency’s planned Gateway complex in lunar orbit. According to NASA’s current plans, astronauts for each landing mission will depart Earth inside an Orion crew capsule launched from Florida atop the agency’s Space Launch System heavy-lift rocket, then rendezvous with the Gateway and float into a lunar lander already docked at the deep space complex.

But NASA said last year companies could submit proposals for the Human Landing System for the planned 2024 mission that do not go through the Gateway.

NASA has not said when it will select HLS contractor teams to begin full-scale studies. A budget passed by Congress last month appropriated $600 million for NASA to work on human-rated lunar landers in 2020, short of the $1 billion NASA requested.