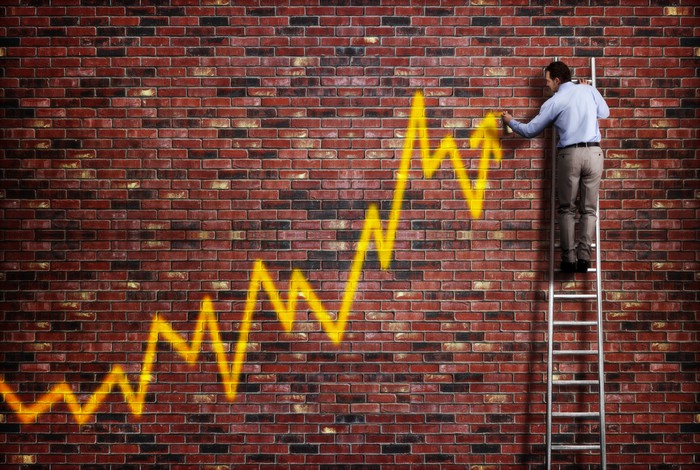 Major benchmarks climbed higher after third-quarter earnings reports provided some good news for investors today. The Dow Jones Industrial Average (DJINDICES:^DJI) and the S&P 500 (SNPINDEX:^GSPC) gained about 1%. The healthcare and financial sectors led the market, and growth stocks in the communications services sector also did well. The utility and consumer staples sectors were laggards.

JPMorgan Chase, the country’s largest bank, reported third-quarter results that were well ahead of expectations, and shares rose 3%. Revenue grew 8.1% to $30.06 billion, compared with Wall Street’s forecast of only 2.4% growth. Earnings per share increased 14.5% to $2.68, beating the analyst consensus by $0.36 per share.

Despite falling interest rates, JPMorgan managed to grow interest income 2% to $14.4 billion. But most of the bank’s growth came from noninterest revenue, which increased 14% to $15.7 billion. Higher volumes in home lending and auto leasing, as well as loan growth in credit cards helped the consumer and community banking business grow revenue by 7% and net income by 5%. Trading revenue increased 14% to $5.1 billion, boosted by a 25% jump in fixed income trading. Book value per share rose 8% to $75.24.

CEO Jamie Dimon said that growth in the U.S. economy has slowed slightly. The consumer remains strong, but business sentiment is weakening due to increased geopolitical risks and global trade tensions.

UnitedHealth beat expectations for third-quarter results and raised its guidance for the full year, sending shares up 8.2%. Revenue grew 6.7% to $60.4 billion and adjusted earnings per share increased 13.8% to $3.88. Analysts were expecting the company to post adjusted EPS of $3.75 on revenue of $59.8 billion.

UnitedHealth’s Optum health services business once again led the company’s revenue and profit growth. The segment grew revenue by 13.3% to $28.8 billion and earnings from operations by 16.1%. The healthcare coverage unit, United Healthcare, increased revenue 4.7% to $48.1 billion and grew operational earnings by 3.8%. The company added 315,000 seniors to its Medicare Advantage program, representing a 6% gain.

Thanks to its strong third-quarter performance, UnitedHealth raised its full-year EPS guidance by $0.15 to a range of $14.90 to $15.00. Looking ahead to next year, executives on the conference call said that a “prudent” estimate of core earnings growth in 2020 would be toward the low end of its 13%-16% long-term growth rate.