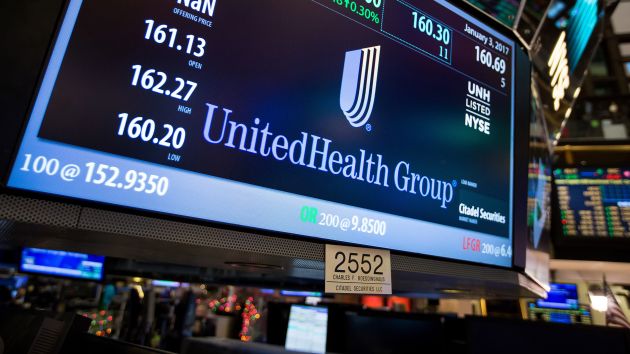 Check out the companies making headlines in midday trading:

UnitedHealth — Shares of UnitedHealth soared 8.2% after beating analysts’ estimates for quarterly profit and revenue and raising its 2019 earnings forecast. The largest U.S. health insurer showed strength in its main business of selling health plans and its pharmacy benefits group.

J.P. Morgan — Shares of the bank jumped 3% after the company announced third quarter earnings that beat analyst expectations on both the top and bottom lines. The bank said revenue rose 8% to a record $30.1 billion.

Johnson & Johnson — Shares of the health care giant gained 1.6% following third quarter earnings that topped expectations for both earnings per share and revenue. The company said higher sales of cancer and other prescription drugs boosted results.

Charles Schwab — Shares of broker Charles Schwab rose 5.4% after the brokerage giant said its client assets reached a record high of $3.71 trillion this quarter, in its first earnings report since dropping commission fees. The company also beat on the top and bottom lines of its third-quarter earnings.

General Motors — The automaker’s stock rose 2.14% as CEO Mary Barra and President Mark Reuss met with leaders of the United Auto Workers on Tuesday, according to CNBC, as GM looked to end the union’s month-long strike. The UAW strike has cost GM about $2 billion so far, Bank of America estimated, as the firm said a prolonged strike could “bring GM to its knees.”

Wells Fargo — Shares of Wells Fargo rose 1.6% after the bank reported third-quarter results. While Wells Fargo’s earnings and net income were both below what Wall Street anticipated, investors appeared to welcome the bank’s restructuring plans, with new CEO Charles Scharf set to begin his role next week.

Lowe’s — An analyst at Piper Jaffray upgraded the home improvement retailer to overweight from neutral. The analyst said Lowe’s has a “path for accelerating comp growth and gross margin upside in 2020.” Lowe’s shares rose 1.6% on the upgrade.

Square — Shares of Square rose 4% after UBS initiated the coverage of the stock with a buy rating. The firm said Square would benefit from “reaccelerating” revenue growth.