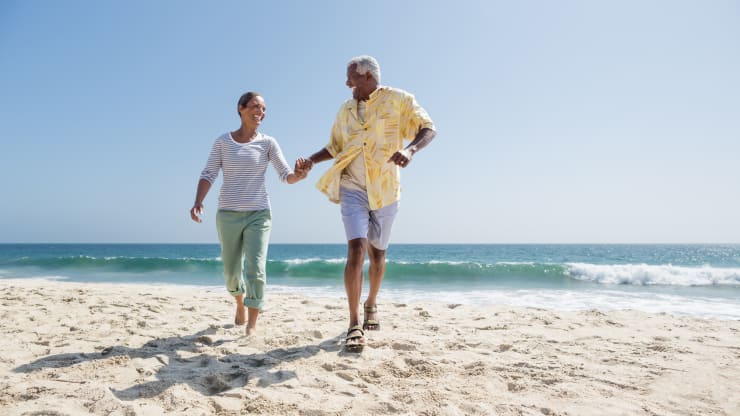 For those fortunate enough to have accumulated a nest egg large enough to last them through their post-working years, some hard decisions can still arise.

You don’t want to jeopardize your savings by keeping too much in the stock market (or in bitcoin). But slide too far toward safety, and you’re back in danger.

“When people hit their target, their tendency is to want to protect what they have saved,” said Alicia Munnell, director of the Center for Retirement Research at Boston College.

First of all, you’ll want to make sure you really do have enough. With longevity increasing – 1 out of 10 people who are 65 today will live past 95 – some say $1 million might not even cut it. (Then there’s the bleak reality that just 7% of American households have a net worth of $1 million or more, and that the median clocks in at around $15,000, according to calculations by Edward Wolff, professor of economics at New York University.)

Allan Roth, founder of financial advisory firm Wealth Logic, offered a simple way to test if you have enough saved: Divide your net worth by your annual expenses after Social Security. “If one has enough wealth to support the rest of their lives, they have ‘won the game,’” Roth said.

It can be next to impossible to know how long you’ll live, but experts say you should be hopeful. “Unless they have a specific illness that shortens life expectancy, perhaps plan to age 95 or 100,” said Wade Pfau, professor of retirement income at the American College for Financial Services.

Ideally, Pfau said, you’d want to have enough to be able to withdraw 4% or 5% a year from your portfolio until the bitter end.

Munnell has her own formula: She said the average person retiring at 65 needs about 10 times their annual earnings saved away.

Now, what to do with that money?

Most financial experts agree that retirees should tone down their stock ownership. “If there was a market downturn, they could lose a significant chunk of what they’ve worked so hard to save,” said Meghan Murphy, vice president of thought leadership at Fidelity. Yet nearly 1 in 10 baby boomers have their entire 401(k) holdings in equities.

“The goal is not to die the richest person in the graveyard,” Roth said.

Still, Roth said, you need your portfolio to keep up with inflation, “which means they must have some of their assets in the stock market,” he said.

Any money that you don’t need for core expenses “can comfortably be invested solely in risky assets,” Munnell said. Her recommended balance: put 70% of your savings in fixed income such as laddered bond investments and an annuity. The remaining 30% should be in stocks.

In our low interest rate environment, don’t expect bonds to allow you much spending in your upper decades, Pfau said. “If you want to spend more, the options are to use stocks or annuities,” he said.

Also: Pfau said research shows retirement portfolios last longest when stock ownership ranges between 50% and 75%. One analysis found the saving’s allocation most likely to outlive you is 80% stocks and 20% bonds. Should this balance make you too jittery, Pfau recommends an annuity.

“A variable annuity can allow one to stay invested in stocks, but also have income protections that will continue to support spending even if there is a significant market downturn,” he said.

It’s only the most fortunate who can afford to exit the stock market completely in retirement, said financial planner Michael Kitces.

“For most retirees – even those who have saved substantial sums – it’s simply not feasible to sit out growth opportunities for multiple decades,” he said.