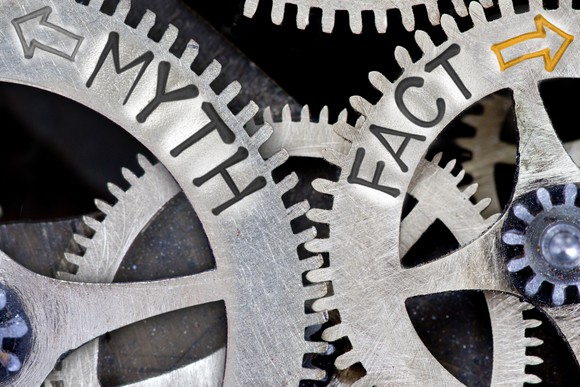 There’s a lot of misinformation out there about Social Security that could lead people to believe things about this valuable program that simply aren’t true. Can you spot fact from fiction? Here are seven statements about the program that don’t pass muster.

This isn’t true anymore. Beginning in 1984, all the members of Congress (and the president and vice president too) pay into the Social Security system. Prior to 1984, most federal government workers were covered by an entirely different program, called the Civil Service Retirement System (CSRS). Therefore, the only federal employees who aren’t paying into Social Security are those who were employed prior to 1984 and who didn’t switch to Social Security from CSRS.

2. Life expectancy was less than 65 when Social Security was enacted

Yes, higher infant mortality rates meant life expectancy from birth was less than 65, but the majority of people who reached adulthood and were working and paying into the system lived to 65 and beyond. In fact, those who made it to age 65 could expect to live an additional 13 years.

3. Social Security numbers include a code indicating a person’s race

Nope. That’s not true. At one point, though, the numbers did show what region of the country a person lived in at the time they filed for their number. Today, however, the numbers are random.

4. The government has raided the trust fund

The federal government does not take money from Social Security to pay general operating expenses. Payroll tax revenue has gone into Social Security’s trust fund ever since the fund was created in 1939, and this trust fund is separate from the country’s general funds.

However, the trust fund does invest in government-backed securities, including special obligation notes, that pay interest. So, in this way, it does provide funding for the federal government, but it does so no differently than an individual who buys U.S. Treasury bonds as an investment.

5. I can’t collect on my ex’s Social Security

Your ex might not want this to be true, but former spouses can collect on their ex-spouse’s Social Security record, as long as certain conditions are met. And it won’t reduce an ex-spouse’s payment.

In order for this to happen, a marriage has to have lasted at least 10 years, and the individual has to be unmarried. An ex-spouse can collect up to 50% of the former spouse’s full retirement benefit; however, that amount can’t exceed what the person would otherwise receive based on their own work record. If their own payment would be bigger, then that’s the payment they’d receive.

No, it’s not broke, but there are financial question marks that need to be addressed.

Social Security is financed by payroll taxes on current workers, and the number of retiring baby boomers means there are more recipients and fewer workers paying taxes. As a result, payroll tax revenue hasn’t covered the program’s expenses since 2010, and that’s forcing Social Security to tap its trust fund to make up the difference.

If Congress doesn’t make some changes beforehand, Social Security’s trustees estimate that the trust fund will no longer be able to close the funding gap beginning in 2034. At that point, Social Security payments will have to be reduced by 25% across the board to match whatever money comes in from payroll taxes.

Not necessarily. Social Security is designed to replace about 40% of pre-retirement income, and increasingly, people are entering retirement with bigger mortgages and more student loan debt, and that’s straining their budgets. Financial security in retirement is also under pressure because fewer employers are offering pensions, and workers are failing to save enough money in retirement accounts to pick up the slack. About half of baby boomers have less than $100,000 in retirement accounts . That’s unlikely to be enough to guarantee a worry-free retirement — especially since the average retired worker is only collecting $16,320 in Social Security income this year.